Seeing as it is hurricane season in the Caribbean I have found some photos of Anne Marie when she survived Hurricane Ivan on 10th September 2004 anchored in Granada.

Hurricane Ivan was the first to hit Granada for 49 years and was category 5. Thirty three people were killed on the island that night.

She was driven ashore by the winds and sustained some scratches, a broken bowsprit, damaged self-steering gear, a broken porthole and damage to her fore-deck. Do a search on-line and have a look at the photos there to see how much damage there was on the island. 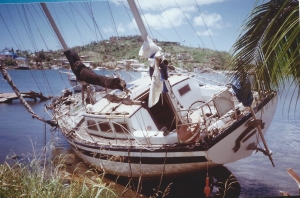 Eric bought Anne Marie a few weeks later and got her ready for sea. He then sailed her to Rye the following April/May where she spent the next five years or so at his mooring on the River Brede, along Rock Channel. She was taken out of the water in 2010/11 for repairs and that is where she has stayed. We bought her in 2015.

I am a well traveled, globe-trotting vessel with great lines. I am told I give a comfortable ride for my years. Although a little worn out I am looking forward to getting back onto the water after a full service. View all posts by Anne Marie (aka Mike Stephens)

This site uses Akismet to reduce spam. Learn how your comment data is processed.